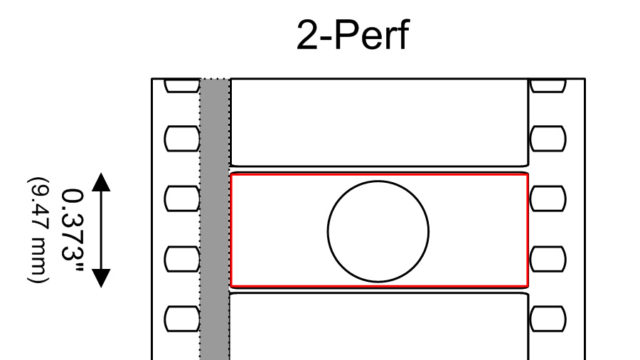 Perhaps the hardest, and most immediate, hit felt by a lagging economy in the film industry are independent filmmakers. Once low budget projects quickly become no budget projects when investors and grants are nowhere to be found. Cutting costs can help, but there’s one major cost that can’t really be cut — film.

Recent reports out of Hollywood suggest major cuts in film use, to save money. One report says only 3 out of 100 pilots shot this year are using film. Most are moving to digital formats such as the RED. But what do you do if digital just won’t cut it?

So, what’s the easiest way to cut the costs of film and still use 35mm? Cut it in half, almost literally. Make four-perf 35mm into two-perf. Panavision is now offering modified 35mm Panaflex cameras with two-perf movements. The cameras can handle the same collection of lenses and accessories as the standard model. Aaton has also recently announced that their new 35mm will be available in two-perf. The savings? Panavision claims a 33 to 50% savings as compared to four-perf film.

The process of using two-perf film is nothing new. In fact, it originated back in 1966 with the Techniscope format. The downside, back then and until now, was the need for an optical lab process. But now, with digitally processes film, that’s no longer necessary.

The bottom line is this — two-perf film can offer similar quality to Super 35, but with a 50% reduction in stock, lab, and rental costs. What’s more, run times are doubled to almost 22 minutes. And, even with a small budget, you can still shoot 2.35 wide-screen images and get that unmistakable 35mm look and feel. It’s the perfect antidote to a sour economy.