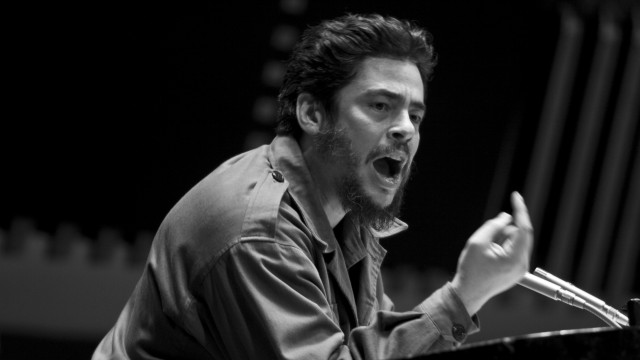 NOFS will be showing the special digital roadshow presentation of Che, in which both parts of the film (each lasting 128 minutes) are presented consecutively, with a 15-minute intermission. There are no on-screen credits, and instead a collectible program will be distributed. Director Steven Soderbergh will be in attendance to introduce the film and take questions after.

November 26, 1956; led by Fidel Castro (Demian Bichir), a band of 80 rebels sails to Cuba. Among these young rebels is Argentine physician, Marxist, soldier, Ernesto “Che” Guevara (Benicio Del Toro). Nation-less, strapped for resources and fueled only by determination, the group engages in swift, bloody battle to free the Cuban people from the corrupt dictatorship of Fulgencio Batista. Che and his soldiers wrestle the nation’s resources and affection from Batista’s grasp. Though considered a hero by some, Che becomes a hugely controversial figure. At the height of his fame and power, he disappears. Part two begins when he enters South America incognito, and he recruits another band of guerilla fighters in the harsh Bolivian jungles. They embark upon an ill-fated mission to spark revolution throughout Latin America.

and if that wasn’t enough…

Set in the weeks leading up to the 2008 presidential election, The Girlfriend Experience is five days in the life of Chelsea (adult film star Sasha Grey in her mainstream film debut), an ultra high-end Manhattan escort who offers more than sex to her clients — “the girlfriend experience.” Chelsea thinks she has her life totally under control; she feels her future is secure because she runs her own business her own way, makes $2,000 an hour, and has a devoted boyfriend who accepts her lifestyle.

The latest film from Academy Award-winning director Steven Soderbergh, The Girlfriend Experience is a sexy, gorgeously shot time capsule from the not-too-distant past.