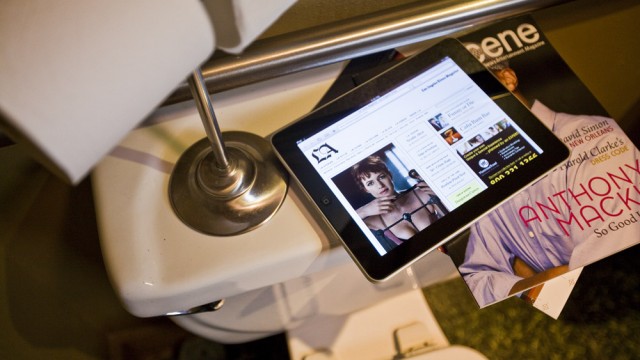 Good design does a lot of things. It inspires, it functions, it communicates. But above all, good design focuses the eye leaving the viewer locked in on an image, on a message on what the designer wants you to see, hear and read. The personal computer, even Apple, has failed miserably in this. I’m not talking about the physical design of a computer; I’m talking about the experience of using one. For all of the things that are wrong with the iPad (more on that later), Apple designers nailed it on the head when it comes to the user experience and focusing our attention on what’s directly in front of us.

At heart, I’m a photographer. It’s a passion passed on to me as a child by my father. I spend a lot of time online at photography forums as well as video and film related websites and applications. Viewing these websites on my computer was always lacking, I just didn’t realize it until I got my iPad. The iPad, because of its dimensions and beautiful screen, leaves me looking at a photo or a video and nothing else. On a computer, I was always looking at a photo inside of a browser on top of my desktop surround by icons and menu items. These things are all distractions, taking away from my enjoyment of viewing a piece of art, a video or a photograph. The iPad strips all of that away and fills the screen with what I choose to view. The iPad has eliminated all of the distractions I had become accustomed to and reminded me of the power of focusing the eye on a singular object of interest. Why is this revolutionary? Actually it’s not. It’s really more of a reminder of what we once had and have forgotten. We no longer have photo albums on the shelves. We don’t have as many printed books and magazines on the coffee table. Even our televisions are becoming Internet devices with widgets, further complicating the viewing experience. We have computers that take care of all these things. But computers tend to complicate our lives as much as they make them easier. They tend to take away from the viewing and reading experience. Computers are distracting. The iPad is the opposite – it’s focused and allows the user to fully digest what’s on screen.

Computers don’t allow this kind of experience. In fact, the reason I love the iPad is because it’s not a computer. It’s also the reason I hate it.

This is my biggest complaint about the iPad and the iPhone. It’s absurd that such a powerful machine forces users to utilize just one application at a time. It’s possible that the 4.0 version of the software (an announcement that will be made after press time) might address this concern. I sure hope so, because the lack of multitasking on the iPad may force me to lose interest.

The browser, in and of itself, is fine. But it lacks two important elements – Flash and tabbed browsing. These are two easy fixes Apple, let’s make those changes once and for all.

While the 64 gigabyte version I have is fine, there is no logical reason to omit an SD card slot to interchange files and expand memory with ease. Forcing everything through iTunes is laborious and seriously affects the user experience.

The application is fine on the iPhone, but the iPad has the power and size for a serious mail program. Mail on the iPad is a toy, and a tedious one at that. For instance, if you have multiple email accounts it will take you as many as 5 clicks to move from one account to the other. Further, you aren’t given the option of having customized signatures for each account. These are standard features on any email client. Apple can and should beef up mail on the iPad.

I have a feeling that most people with the iPad are going to leave it around the living room or the kitchen table. If you have family, everyone is going to want to use it because of how incredibly convenient it is. But, Apple does not give the option of multiple user accounts. This should be a standard evolution from the iPhone software. It’s not needed on a phone. It is on the iPad. As much as I love my kids, I don’t trust them with my corporate email account in their hands.

The App Store has completely revolutionized mobile computing. It’s a billion dollar industry all its own. When I need something, I can get it immediately. No lines, no software, no credit cards – just instant access to any application. And once developers get their hands on the iPad, the sky is the limit.

Despite some issue with glare, the iPad screen is perfect. It’s the perfect size and I swear I’ve never seen a monitor with such clarity. I have never been able to comfortably read on a computer monitor before. My employees can attest to this as they have always had to print out content for me to review. But the iPad’s screen is so perfect, so crisp and clear that I can actually read comfortably. It’s easy to scroll, navigate and interact with as well.

Apparently Steve Jobs has found a way to use nuclear power in personal computing devices without the U.S. Government finding out about it. That’s the only explanation I can come up for why my iPad has yet to dip below 85%, even after a day of heavy use.

What Other’s are Saying and Why They’re Wrong

“It’s awkward to hold and slippery”

If you can hold a book or a magazine in your hand, you can hold an iPad. There’s no less room to hold and read on an iPad than there is on a book. However, when holding the iPad it can be a bit awkward to control and navigate. That’s mostly because of the size – in order to move from holding it to hitting a button or link, you have to rearrange your hands quite a bit. On the iPhone you can navigate everything with one thumb because everything is within reach. That’s not the case with the larger iPad unless you’re using it on a flat surface like you would a laptop. And it’s true, it is a bit slippery – but that is easily remedied with the Apple case. The case is cheap, it eliminates the issue of slipperiness, it’s slender and it functions as a stand for viewing content and typing.

This complaint is courtesy of the same idiots that complained about the keyboard on the iPhone. The same keyboard that they are now typing at a 150 words a minute on. The keyboard is just fine. No, you’re probably not going to write a novel on it – but did you by an iPad to write a novel on? No, you didn’t. I’ve easily written 3-4 page documents on my iPad with very few errors. It’s like anything else – give it some time and you’ll get used to it.

So do thumbnail images when they are enlarged to 5×7 photos. What did you expect? iPhone apps were tailored to the iPhone screen. The iPad screen is much bigger. Is this really that complicated to understand?

“It doesn’t replace anything”

While I understand this argument, because a lot of people are looking for the one device that replaces everything and gives them an afternoon massage. But, the iPad was clearly not meant to replace anything. It’s a new product in a new category. If you want it buy it. If you don’t, then don’t. But don’t expect something out of the iPad that it was never meant to be. The bottom line for me is this – the iPad is not a computer, it’s not a netbook and it’s not an iPhone. It’s an iPad, with all of its limitations and all of its positives. Some of the limitations, like multitasking, could be deal breakers for me down the road. But I expect Apple to address these issues over time. After all, it’s a new species and it needs time to evolve.

In the mean time, I’m going to sit back and enjoy the newest episode of Lost in perfect clarity through the ABC application on my iPad. Or maybe I’ll read an old comic in a revolutionary format with the Marvel application. Or I’ll catch up on some news, maybe some light reading or even take a trek down memory lane with old photos in high resolution on one heck of a beautiful screen. I have a feeling my laptop is going to get lonely.