The Man vs. Google 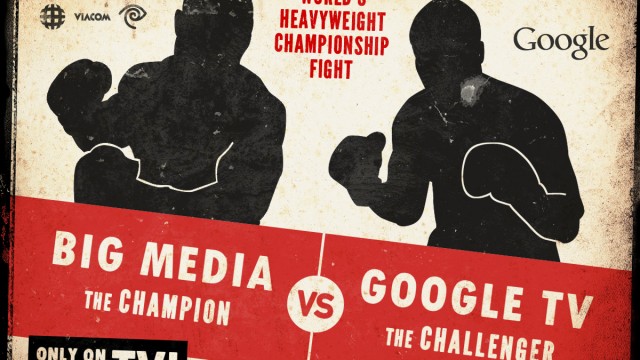 My biggest problem with Google TV isn’t Google TV at all.

This column was supposed to be a review of Google TV. It was supposed to compare Google TV to Apple TV and other similar systems. But as I sat down to write my review, I realized that my biggest problem with Google TV isn’t Google TV at all. It wouldn’t be fair of me to write a somewhat harsh review for something that I rather liked, or could have liked to be more accurate. My biggest problem with Google TV is “The Man.” In this case, the man is big media.

Google TV was created, in the words of Google, to bring “TV, apps, search and the entire web…together at last.” It was supposed to make watching television, browsing the web, watching web video and utilizing various apps a seamless experience. In theory, browsing TheOnion.com would be as second nature as watching 30 Rock off your DVR. And, for the most part, it is. I wouldn’t call it seamless, but it’s a step in the right direction. But the biggest draw for Google TV was the idea of watching web video on your television. It is here that the system has failed us.

Today, you can pretty much watch any television show online. Whether you’re watching directly from a network’s website, or through Hulu or other similar platforms, just about everything can be found on the internet. It’s getting to the point where cable and satellite companies are starting to get nervous. After all, at this pace, who’ll need them in a few years? Apparently the networks are sympathetic to the cable and satellite company’s troubles. Because they, along with Hulu, News Corp, Viacom and others have blocked access through Google TV to their online offerings.

What does all this mean? It means that Google TV, as it stands today, is little more than an overly complex $300 web browser that can’t access the web video most of us would want to watch on our TV.

The problem is a complex. The reason is not – money. Television is a profitable business. Web video is not. Broadcast and cable networks are just fine with us watching their offerings on our computers, but they get very nervous when the computer is actually our television.

Google rocked the boat, so big media just decided to drain the lake. It’s not personal, it’s just business. And, it shouldn’t come as a surprise. Big businesses like consistency. They like predictable profit margins. They like control. Full integration of television and the web is as unpredictable as it comes. Advertisers would demand steeply discounted rates, profit margins would grow slimmer and CEOs would start seeing their golden parachutes drift off in the wind.

Here’s the problem though – trying to stand up against the integration of media and the internet in the home is like trying to keep an LSU football fan from throwing his remote when Arkansas scores an 85-yard touchdown with 6 seconds left in the half. It ‘aint gonna happen. Google just has the misfortune of being the first major company to rock this particular boat. Big media can’t and won’t stand for it – at least not right now. They know it’s coming, they’re just trying to figure out how to survive or how to control it once it does. Apparently, they haven’t figured it out yet because they are doing their best to shut Google TV down. And, they just might succeed.

Before I forget about my review – Google TV is an often awkward, sometimes complicated, media integration device that simply costs too much money and can’t offer what I want when I want it. But, it’s an admirable step in the right direction.

My biggest problem with Google TV isn’t Google TV at all.