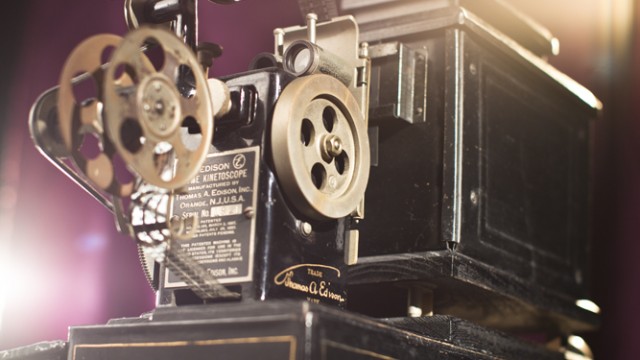 The concept of movies delivered to the home is nothing new. In fact, the idea is probably a lot older than you think.

Not too long ago, most of us got our DVDs in the mail. We opened the envelope, slipped out the DVD and enjoyed two hours of entertainment before slipping it back in the envelope and dropping it in the mailbox. Tomorrow, or the next day perhaps, we’d get another movie. It’s a process that is almost as familiar to most of us as microwaving popcorn. Now, many of us stream our movies via Netflix on our televisions, Apple TV or any number of other streaming devices. But the concept of movies delivered to the home is nothing new. In fact, the idea is probably a lot older than you think.

In 1912, Thomas Edison offered a film projector for the home called the Edison Home Kinetoscope. Keep in mind, the first time anyone, anywhere, had ever seen projected film was in 1895. The first theater in the US dedicated exclusively to showing motion pictures was Vitascope Hall, opened on Canal Street in New Orleans on June 26, 1896. Just 14 short years later, Edison’s company was able to produce a machine small enough and, in theory at least, easy enough to operate for users to show film in the comfort of their own home.

Edison also offered a 250-page catalogue of movies on non-inflammable acetate film (a breakthrough in its own right) for rent to home viewers. Just like Netflix, you checked off what movies you wanted and they would show up in the mail. Obviously, they weren’t DVDs, but you’d be surprised at how small the films really were – a different shape, but no bigger than a DVD really. Once you were finished, you simply returned it in the mail. Again, this was in 1912! Thomas Edison was a genius. There’s little doubt of that. But, his genius was just as much in business as inventing. Most of his “inventions,” including the Kinetoscope, were really invented by someone else. Edison put his name on them, marketed them, and sold them worldwide. Edison was a visionary. He was the first inventor to apply principles of mass production to the process of innovation. His large team of inventors were driven unmercifully by Edison. They were salaried inventors, a new concept to be sure. And, many were left feeling disillusioned when “their” inventions were stamped with the Edison logo, patented under Edison’s control and sold worldwide.

Edison applied similar control to the movie industry. Until very late in his career, Edison ruled the world of filmmaking with an iron fist. To make a movie in America, you had to lease his cameras, his studio lots, his actors and ultimately his projectors. Even the film stock itself, produced by Eastman Kodak, could only be sold to Edison’s producers. Eastman essentially acted as a toll collector for Edison. They would sell only to members of Edison’s Motion Pictures Patent Company. On top of the sale price, they charged a 12 cent fee, which went to the Patent Company. Even further, movie producers could only sell their films to theaters that were members of the Patent Company. They then had to pay a $2 weekly fee for each Edison projector they operated.

Edison even went so far as to create his own enforcement agency charged with spying on filmmakers to ensure they were using his equipment only. If they were not, he’d stop them at any cost. There are stories of Edison snipers in the hills shooting unapproved cameras and equipment on the sets of those who dared work outside his rules. Producers would try to get around this by covering their imported European cameras with blankets between shots so Edison’s thugs couldn’t identify them. So, it’s not really a surprise that Edison would also figure out a way to ensure only his movies made their way into the American home (played, of course, on his projectors). Unfortunately, the idea flopped. Only a few hundred home projectors were ever sold in the U.S. Every machine shipped to Europe was returned unsold. The machine cost nearly $100 at a time when the average factory worker made $2 a day. They were prone to breaking and almost no one knew how to fix them, a problem that found its origins in Edison’s controlling nature.

Eastman Kodak wanted to distribute the new home device through its dealers across the country. Edison, however, chose instead to rely on his own existing network of phonograph dealers. That presented a problem as his phonograph dealers had no training in motion picture devices, or knowledge of how to service them. Complaints of tangled film, locked gears and hosts of other problems went unresolved, that is for the very few who bought a Kinetoscope. Any hope of redemption for the home Kinetoscope went up in flames in 1914. Nearly 75% of Edison’s West Orange, NJ, facility burned to the ground in a devastating fire. It was a sign of things to come.

It was around this time when filmmakers and studios on the East Coast found out that southern California offered incredible opportunities for filmmaking. Among many other reasons for this was the reality that California was as far away as you could get from Edison and his patent enforcers.

The migration of movie making from East to West had officially begun. Some of these filmmakers who were moving west joined forces to fight Edison and his control of the industry. In 1917, the Supreme Court of the United States finally broke up Edison’s oligopoly over American cinema.

Interestingly enough, these independent filmmakers who fought to get out from under Edison’s control of the industry eventually found themselves doing many of the same things in the name of corporate control. Until very recently, it was these southern California studios that dominated American cinema with total control of the industry, much like Edison before them.

Thomas Edison’s heavy-handed approach was not only his undoing in the film industry, it also helped to establish the Hollywood we know today.

But, Edison’s idea for home movie delivery never died. From his headquarters in West Orange, NJ, in the early 1900s, Edison had revolutionized home entertainment and the movie industry. He realized, way back then, that entertainment in the home was the wave of the future. There would be a time when Americans wouldn’t need to get dressed up, go into town, and spend a lot of money on dinner and a movie. In Edison’s mind, they could do it in the comfort of their own home. Unfortunately, Edison couldn’t allow anyone else to be a part of his dream. His overly complex and expensive machines, untrained service and sales network, and heavy-handed control of the film industry conspired to nearly destroy an idea that we take for granted today.

Whether it was ego, or just an idea that was way ahead of its time, it amazingly took another 87 years for Edison’s idea to truly become reality. The DVD player, the Internet and a company called Netflix came together to change the way we watch movies at home. They revolutionized the movie rental industry, but they most certainly did not invent the idea of movies in the mail. We can thank Thomas Edison for that.

Mr. Edison, I appreciate the light bulb, but I’m most thankful for the original Netflix – way back in 1912.

The concept of movies delivered to the home is nothing new. In fact, the idea is probably a lot older than you think.