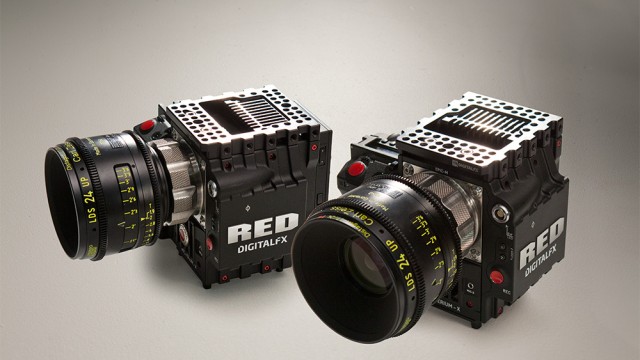 Last week, my daughter took an interest in an old 1950s box camera of mine. Eventually, she asked me if I would get some film for it so she could actually take pictures.

The camera uses 620 film, and I assumed I couldn’t buy that anymore. Within an hour, my daughter found 620 film online. She’s been taking pictures ever since. Film is not dead, but it’s slowly becoming a bit of a novelty. And, Red’s brand new Epic-M digital motion and still camera isn’t helping film’s cause.

The Red Epic-M isn’t even in production yet. There are only a few hundred in the world and, for now, they are all hand made. The “M” in the name stands for machined, as in hand made. James Cameron just recently ordered 50 of them. Peter Jackson has another 30 or so. I was lucky enough to get two of them. Now, I can’t come up with a good reason why I would use any other camera. It’s called the Epic, and that’s putting it mildly. The specifications alone are just downright awe inspiring. It shoots 5k footage. To put that in context, 5K is around 6.7 times the size of 1080p. It can shoot at up to 120 frames per second at 5k, and even 300 fps at 2K, with each frame measuring in at 14 megapixels. The Epic is also unique in that it is designed as a digital still and motion camera (DSMC) with a resolution that exceeds 35mm and provides a dynamic range of over 13 stops. With Red’s HDRx, the dynamic range is increased to 18 stops. And, it’s all in a very small package – a little larger and slightly heavier than a Canon 5D.

Calling the Epic a camera is like saying a Bugatti Veyron is just a car. The Epic is THE camera. It’s the one that could convert even the most hardened film devotees. In person, the Epic looks like a piece of military hardware. It’s matte black, with hints of red and stainless steel. It’s so well built, so solid, it looks like it could take a beating in a war zone. If it weren’t for the lens attachment, you’d be hard pressed to guess it’s even a camera at all. Pick it up, and you’re immediately struck by the weight. It only weighs in at 5lbs, but it feels somehow heavier than that. Things this small usual don’t weight that much. But it’s a good weight, almost a reassuring weight. It’s solid and it means business.

Once you attach the hand grip, a lens and monitor, it suddenly transforms into something that looks at least a little bit like a camera. Only, it’s way cooler looking. I’ll admit to spending an uncomfortable amount of time just looking at it.

Like the Red One, the precursor to the Epic, there are hundreds of attachments and accessories you can mount to the Epic. Red has also come out with their Bomb EVF, or view finder. In true Red fashion, it takes view finders to another level. It contains a 720p image, and it has an internal heater. The new external monitor is now a touch screen, making navigating through the humongous menu settings more palatable. There are dozens and dozens of customization options, both in the software settings as well as in hard buttons on the camera grip. In short, you can outfit the Epic in a way that would make Paris Hilton’s chihuahua jealous. But, no matter how cool it may look or even what its tech specs may be – the only thing that matters is the image. Some of the first images I captured were of my children in our backyard. I had no experience with the camera, no lighting, no testing, nothing. All I had was the Epic. I shot in 5K, 2.4:1 at 48-120 frames per second. There’s a certain quality to the Epic image that simply has to be seen. It’s incredibly detailed and sharp, as you might expect with a 5K image. But it’s also able to avoid the sometimes unreal, overly-sharp, images often associated with HD cameras. The images came out beautiful, artful, organic – words I normally associate with film.

Best of all, I can view the images immediately. Pop out the SSD card, slide it into an SSD drive on the computer, and you can view, edit and correct your RAW images within minutes of filming. Better yet, I don’t need a super high-end computer to do it. My MacBook Pro provides all the processing power I need.

The downsides to the Epic? For one thing, it’s expensive. The Epic-M body alone costs $58,000. Once you fully outfit it with all the necessary lenses and accessories, you’re looking at a camera setup that costs more than a starter home. The Epic is not a prosumer camera. It’s for professionals, with professional budgets. The data it produces requires enormous storage demands. If you’ve ever tried to store even 1080p footage to your hard drive, you can imagine how quickly 5k footage will fill up even the largest consumer hard drives out there. It’s also a new camera, still in its infancy. There are glitches and errors still to be worked out with new firmware. I even had to send back my first Epic to get a replacement. Which brings me to one of my favorite aspects of dealing with Red – their customer service. Without question, Red is the most responsive, customer-focused, company I have ever worked with. Their customer service matches, if not exceeds, the quality of their cameras. And it isn’t just about fixing problems. Red takes it a step further. With the Epic, they’ve literally created a camera platform that will be upgradable for years to come. It’s designed with future upgrades in mind. Red just recently announced at NAB that there will be an upgraded sensor for the Epic called the Red Dragon, just as they offered the MX sensor upgrade for the Red One. Additionally, when Red develops a new brain for the camera, you can upgrade that too. In 25 years in this business, I have never had a camera manufacturer offer to upgrade a sensor, much less the entire brain. If I wanted new technology, I had to buy an entirely new camera. Red’s model increases the lifespan of its cameras in a way no other manufacturer has ever dared. Yes, there’s the cost and the glitches here and there to consider. But then there’s the hardware, the upgradability and the technical achievement that is the Epic. And, there’s the image, those beautiful hypnotizing images. There’s a reason the two most powerful film producers on the planet are buying up more Epics than Red can keep up with, and it’s not just because it’s cool looking. It’s because the Epic is the culmination of everything we’ve been waiting for in digital cinema cameras. It’s small, more powerful than anything on the market, customizable, fast and it produces gorgeous images that can rival or beat even the best 35mm can offer.

Is film dead? No, it’s not. But, thanks to the Red Epic, it may be on life support.

Last week, my daughter took an interest in an old 1950s box camera of mine. Eventually, she asked me if I would get some film for it so she could actually take pictures.